This mythological beast of a jackpot slot from Playtech takes the player on an epic adventure to an ancient city whose treasury contains 125,000 coins. 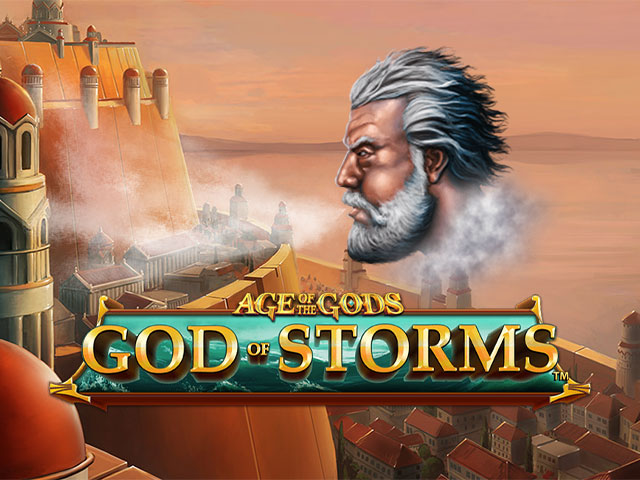 Age of the Gods: God of Storms Page Heading

Players can play for a chance to win this amount or one of the four instant jackpots. Age of the Gods: God of Storms is fitted with a reel set of standard, three rows and five reels that spin across 25 paylines.

The best selling point of the present game are not  the jackpots. Those are a fact and some players may get to chance upon them and feel the thrill of the windfall winnings. Here, the base game comes with two Wild symbols and both are expanded.

This can come as handy in capturing multiple payline wins from the same spin. In addition to  it, God of Storms has a respin feature and win multipliers that can give your winnings a serious boost.

Let's climb the top of the ivory tower of this magnificent city and enjoy the view of the potential winning while browsing the Age of the Gods: God of Storms slot review.

If the phrase Age of Gods doesn't mean anything to you, we'll clue you in. No, it isn't a reference to a famous literary body but a series of online slots made by Playtech.

Age of Gods: God of Storms slot has multiple siblings which are more or less in the same vein - epic, ancient and filled with fantastic creatures and realms.

The present game is about three fearless warriors  who are in pursuit of ancient treasures. They may or may not get help from the God of Storms on their adventure. If they do, the player gets the benefit of win multipliers and respins.

The graphic design appears a bit basic because the picture symbols lack animation, but each figure  has been drawn perfectly and with character. The gameplay flow isn't dry. On the contrary, winning outcomes are marked with a lightning effect and there is a cool musical theme as a soundtrack.

About Age of Gods God of Storms Slot Online

If you are drawn to enter the Age of Gods world, you can play the game with a bet range between 25p and £250.00 per spin. To choose the wager that you wish to bet, you need to select the number of paylines and one of the values for the Line Bet setting.

This is one of the rare contemporary online slots that lets the player choose the number of paylines, but in our experience, it's always best to play across the available maximum. This way, you don't miss out on any potential winnings.

One of the reasons why you may want to  change that number sometimes is to pace your bets in order to preserve your balance. Sometimes you may want to drop the number of paylines to a lower value, enabling you to play Age of Gods: God of Storms slot with less expensive bets.

To view the paytable, simply press the Info button which you can find in the bottom-left corner of the screen.

Where available, players can play the game in Autoplay mode by selecting one of the available presets, however, Playtech usually doesn't include an option for enabling a loss limit.

In that respect, it's best to choose an amount for your bet that you can afford over the number of spins you wish to play.

The mood of the adventure at hand is set by the dramatic soundtrack and the background image of a sprawling city with its many towers. The desert environment adds a tinge of mysticism to the overall impression.

The symbols reflect a band of warriors which represent the high-paying group of symbols. The remainder of the symbols is a couple of artifacts and royal cards.

In terms of values, Age of Gods: God of Storms slot has the following potential payouts:

All of the values above are multiplied by the payline bet.

Notable is that the warrior symbols can pay for two of a kind. Although the amount is small and falls well-below the full bet, it is always good to generate a win.

If you get two such symbols and a wild on one of the adjacent reels, the payout will count for three of a kind.

On the matter of the Wild, the standard substitute symbol doesn't pay any but the Ship Wild, which can sail from reel to reel, can pay 5x and 25x your payline bet for two and three of the same kind.

Part of every slot adventure are the  so-called hard specs. Here we have a game that has medium volatility and a positive RTP value of 96.14%.

The volatility level reflects precisely as such during the gameplay. Players can expect the potential winning outcomes to swing between low and medium, with the rare big win.

On the other hand, the consistency of the medium payouts is quite solid - they don't come at a great frequency but they do appear, especially during the Ship Wild respin mode.

Basically, this is the feature that can extend your balance and even improve it with Ship Wilds that appear on the fourth reel and do their job as they move leftwards.

To trigger the bonus feature that we've just announced above you only need to get a single Ship Wild symbol on any one of the three reels in the middle. In the event, the special Wild symbol will begin to move from right to left - helped by the God of Storms who blows wind in its favour.

The main element to the bonus feature is the fact that the Wild lingers on the reel set. If it lands on reel four, it will take three respins before it exists.

For each respin, the Ship Wild generates a  win multiplier of 1x. The maximum win multiplier is 5x on the last spin. This enables a nice progression in the amounts of your winning outcomes, especially if the matching symbols belong in the high-paying symbols category.

The Bonus feature can retrigger. Unlike standard free spins bonuses where you need a set of Bonus/Scatter symbols, in Age of Gods: God of Storms slot you only need a single Ship Wild to land one reels two to four.

Playtech counts for one of the most prolific online and land slot developers in the world. Their Age of Gods series has become quite popular due to the fact that one or more of the four jackpot prizes may drop randomly on any spin.

Age of the Gods slot

the original game that started the series, is one of those that comes with a progressive jackpot and a maximum win potential of 10,000x your bet. The game has cool graphic features, 20 paylines and four different free spins bonuses that come with added features, like Wild symbols added randomly across the reel set.

is a branded game that takes many cues from the Batman movie featuring one of the best Joker appearances ever - that by Heath Ledger. The game has 50 paylines, five reels and a maximum win potential of 1,500x from the free spins bonus feature.

pays tribute to one of the jockey greats. The game has medium volatility, big win potential on every spin and 25 paylines. On the other hand, an RTP of 93.01% makes pro players curious as to why Playtech has decided to shave off 3% from the average. Definitely worth checking out.

There are so many Age of the Gods slots that you wouldn’t be able to pick one when looking at the selection. No, they are not all the same. Each has different features and volatility levels, but also, most are actually quite good games. We can recommend this game because of the Ship Wilds. Having the feature trigger with only one such symbol can be a boon for your potential winnings.

Claim a welcome bonus and experience  the Age of the Gods: God of Storms slot at some of the best and more generous online casinos in the world.