Land the towering colossus on the reel set to gain a boost in odds and win multiplying values when you play this 2022 new online slot from iSoftBet. 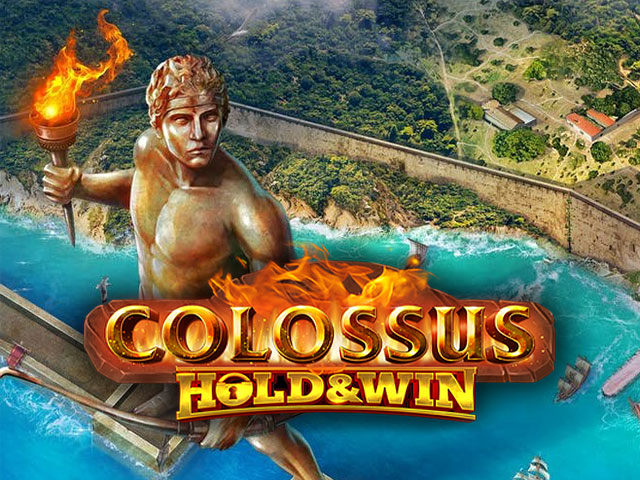 Land the towering colossus on the reel set to gain a boost in odds and win multiplying values when you play this 2022 new online slot from iSoftBet.

The game at hand comes with a Hold and Win bonus feature which itself can trigger the biggest possible payout from a single bet: 10,000x your bet.

Colossus Hold and Win is one of those inconspicuous yet highly-engaging slots with only five reels but a set of specifications and features that rocks.

Our highlight is, of course, the bonus feature, however, the base game doesn't leave you without a little something that can make this reel adventure appealing in the base game as well.

Get more details from our Colossus Hold and Win slot review and claim a casino welcome bonus to look for this title at top-ranking casinos.

Delve into this sea-faring adventure in the ancient world where statues come alive to battle fierce warriors. The game was inspired by the ancient history of the Mediterranean basin, which is replete with heroic stories and, of course, heroes.

The layout of the game takes the player to an exciting premise where you can spin across 20 paylines and five reels for a chance to win prizes of up to 10,000x bet. iSoftBet is the company behind this February 2022 release that doesn't put the entire focus on the Hold and Respin feature game.

Indeed, iSoftBet has introduced a Wild symbol that can both expand across the entire reel and add win multipliers of up to 10x. This is absolutely amazing - a refreshing outlook on a style of online slots that usually is all about the feature game, while deeming the base game as a vehicle that can get you there.

The payout mechanic of Colossus Hold and Win slot is a standard multi line game where you need three matching symbols for a win. The winning combination must begin on the first reel and go uninterrupted towards the fifth reel.

About Colossus Hold and Win Slot

You can begin playing the game by pressing the Spin button, which is located on the right side of the reels. Above and below it are buttons for Autoplay and bet selection, respectively. You can engage Colossus Hold and Win in Auto mode by choosing one of the automatic spins presets and adding a single maximum win limit or a loss limit.

iSoftbet has equipped the game with a range of bets between 20p and £20.00 per spin, derived from coin values between one penny and one pound per payline. Colossus: Hold & Win Slot slot comes with a Bonus Buy option. Selecting the button on the left enables you to receive the required number of golden shield symbols to trigger the Hold and Win feature, at a cost of 100x bet.

If you would like to toggle the sound on or off you can press the speaker button in the bottom-left corner. Next to it you can see the 'i' button which is for Information. This button loads the paytable where you can view all of the symbol payouts and gameplay details.

Colossus: Hold & Win takes you to the ancient world where you'll be able to make sacrifice to the gods for a chance to land a big win. The eternal fire of the gods can be seen in the right corner. This area comes to life during the bonus feature where the fire can smelt some win multipliers to increase your potential payout.

The designers have included a really nice set of symbol art. The high-paying picture symbols represent a shield and a sword, torso armour, galley and a warrior with a helmet and spear. The low-paying category consists of four royal cards.

Needless to say, Colossus: Hold & Win Slot slot has two special symbols: the expanded Wild and the golden coin. The letter is the bonus symbol and is scattered, meaning, it can land anywhere on the screen in a sufficient number in order to trigger the Hold and Win bonus game.

Overall, the paytable has a quite decent structure of payouts for a Hold and Win/Hold and Respin slot game. The lowest combination consists of three Jack symbols and pays 0.25x bet. Notable, three King and Ace symbols can pay 0.75x and 1x your bet, which is absolutely positive.

You can land cash prizes consisting of your full bet, or more for any combination consisting of the high-paying symbols. In that respect, the paytable structure is as follows:

All of the values are expressed as multipliers time your full bet amount. That said, we can conclude that Colossus Hold and Win slot was given a set of symbol values that are highly appealing, however, you also need to consider this fact through the prism of the volatility of the game engine.

In that respect, Colossus Hold and Win is at the highest level, which means, massive payouts are possible but are rare and the norm that can be expected is small payouts consisting of three and four symbols of the same kind.

Now the more exciting part of the reel adventure. While the base game can indeed award prizes that are appetizing, by way of the Wild Win Multiplier feature, Colossus Hold and Win holds its best potential in the bonus game.

For starters, we should describe the Wild. This symbol always lands expanded on all reels but the first and always comes with the following random win multiplier values: 2x, 3x, 5x and 10x win.

The main bonus game, which we can also call the Jackpot bonus, can trigger upon six golden coin symbols landing anywhere on the reel set. The coins come attached with cash values, which are added to the final tally upon completing the bonus game.

During it, Colossus Hold and Win slot can award any one or both smaller jackpots by attaching their value on one or two of the coins. The Minor jackpot is 50x your bet and the Minor is 500x bet. Both possibilities are more than welcome in view of the amounts they can award.

The kicker of the bonus game can be felt if the entire grid of 15 positions gets covered by the Bonus symbols, for a chance to win 10,000x bet Colossus jackpot. Landing all 15 coins isn't going to award that sum right away - it has to come from the eternal flame, which can award a win multiplier amount to any prizes that you may have won.

Overall, this is an excellent game to play on your PC but it is as equally exciting if you play it on mobile or tablet. You can do that at online casinos with iSoftBet slots. You can load your selection directly from your mobile web browser and play online with all features and graphic design details included as part of the gameplay.

The game in our mini slot review is steeped in magic and the graphic design corresponds to the premise richly. Players can engage in this highly volatile reel adventure for a chance to win payouts of up to 13,867x from a single spin. The layout consists of five reels and six that can spin across a maximum of 7,776 win-ways. Phantasmic Fortunes is dynamic, lively and filled with features and for that matter, it has been available at online casinos since 2020.

Colossus Hold and Win is one of the better games in that category, which is owed to its straightforward gameplay and supercharged Wild in the base game. Also, this is one of the rare games whose Hold and Win feature comes with win-multiplying ability.

Play the Reel Colossus Hold and Win slot at licensed online casinos. You can start your online slots adventure by claiming an exclusive casino bonus from this page.